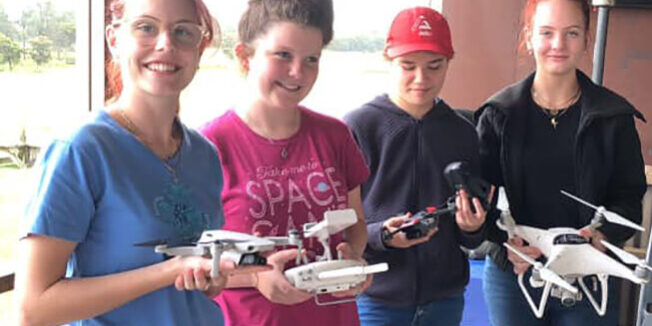 Welcome to the first newsletter of The Gadget Girlz. There is plenty to share and we are looking forward to highlighting a couple of our Gadget Girlz every week via our website.

Hi, my name is Jessica Kreskay, and I am the chairperson of The Gadget Girlz. I am currently eighteen years old and graduated from high school in 2020.

As you know, we formed The Gadget Girlz to inspire females to try new things, aspire to be successful and a role model for others. The Gadget Girlz are here to stand up and change statistics in male dominated STEM fields. We have only been going since April 2020. The Gadget Girlz started with a team of eight members ranging from the ages of fifteen to twenty-one and has now grown to roughly about 50 females across Australia and the globe from all age groups.

The Gadget Girlz Drone Academy first commenced in December 2020. The purpose was to learn how to fly First Person View (FPV) multi-rotors.

The Gadget Girlz meet at One Giant Leap Australia Foundation Headquarters (HQ) for practice on simulators, multi-rotors, DJI products and Remote Control aircraft. The Gadget Girlz drone team are being sponsored by DJI. By being able to practice with good quality equipment, they will be able to present workshops, deliver presentations and simulator demonstrations that will inspire other girls to try flying remote control aircraft and multi-rotors. One major aim being to increase the number of girls being engaged in this high tech pursuit.

To practice, the Gadget Girlz first flew DJI products (such as the Mavic Mini, Phantom 4) around the Hawkesbury Model Air Sports (HMAS) airfield on Bandon Road, Vineyard. They practiced flying more complicated drones on the simulators back at HQ. After hours of practice, they went back out to the field to fly real FPV drones, provided by The Gadget Girlz support crew. They had so much fun flying real FPV drones for the first time and really enjoyed flying all around the airfield. The practice really paid off. It built confidence in their ability to fly.

During their time spent at HQ, The Gadget Girlz learnt the CASA rules and regulations that are required to be followed in order to operate any kind of remote aircraft, multi-rotor or FPV drone. The rules The Gadget Girlz have learned will help them further understand the complexities of drones and this new and high tech innovation space in Australia. Safety is a crucial aspect of multi-rotor flight, so it is essential that everyone is up to date on these safety rules and regulations. In the future, when The Gadget Girlz on their robotics roadshow later in the year, they can pass this knowledge onto other aviators.

Overall, the time spent at HQ resulted in the completion of the learning process of expanding their knowledge and skills of operating all types of multi-rotors and it was beneficial to all of The Gadget Girlz. Each individual Gadget Girl has had a lot of fun flying the drones down at the airfield and training on the simulators. They got to know each other better and are experiencing many amazing opportunities.

To legally fly FPV drones in Australia, the pilot must be a member of the Model Aircraft Association of Australia and fly at a CASA approved field. People under 16 must be supervised by a person over the age of 16. The Gadget Girlz are all youth members of HMAS. If you wish to know more about FPV and drones, just reach out to us.

Did you get a drone for Christmas?
Do you want to try to fly a drone but are too scared to try?
Do you want a drone and don’t know how to fly?
Can your children fly a drone and you have no idea but you want to have a go?
Are you aware of drone regulations in Australia?
Are you interested in flying drones as a career?
Register for our free one-hour information session about drones in Australia and careers in this field. Date and time to be announced. 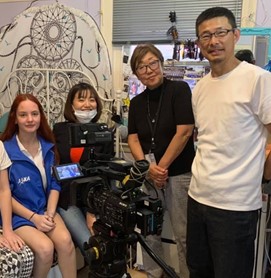 Hayabusa 2 is a space probe from Japan that took samples from 162173 Ryugu, which is an asteroid near The Earth. It launched December 3rd, 2014. It launched from Yoshinobu Launch Complex and rendezvoused in space with 162173 Ryugu on 27 June 2018. It stayed on 162173 Ryugu for one and a half years. The spacecraft deployed two rovers and a small lander onto the surface. While it was there it took samples and surveyed it. The capsule they put the samples in was 40cm in diameter. It landed in Woomera, Australia in December 2020. The mission lasted for six years During the six years it travelled 5.24 billion kilometers. Hayabusa 2 was created by JAXA.

On the Space For A Day that was held in Richmond NSW late last year, we did activities involving Hayabusa2. One of the first things we did was listen to a presentation that was created by one of The Gadget Girlz, Jessica Kreskay. It was the first time many of us had heard about Hayabusa2. We learnt about the landing site and how it was in Australia. We also learnt about why it went to space.

We were then given an activity where we had to make a 3D model of Hayabusa 2 using only paper, glue and scissors. It was a really good experience because we got to see construct our own model of Hayabusa 2 and work out how it was built and the different instruments it had onboard.

We were actually on mainstream news in Japan!